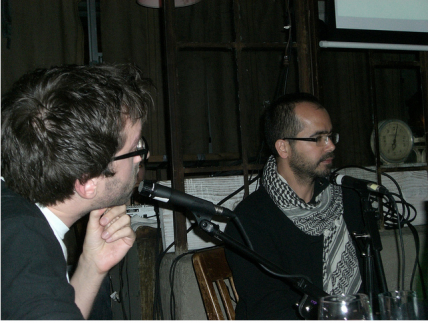 Organized by Arturo Vidich for the ongoing series
YOU SHOULD HAVE BEEN HERE AN HOUR AGO
a series of performance, film, and interruption.

For the third installment of the monthly series YOU SHOULD HAVE BEEN HERE AN HOUR AGO, performance artist Arturo Vidich invites artist Wafaa Bilal to talk about his work with writer Ashley Rawlings.

Wafaa Bilal occupies a distinctive tract of contemporary art that has dealt with the invasion and subsequent occupation of Iraq. The sharp poetics of Bilal’s output extend into uncomfortable realms of loss, and abuse of power in the digital age, often provoking layered responses from viewers which range from open dialogue to censorship, and from violence to intervention. Bilal does not shy away from adversity, rather, he incorporates the dialogue into his manifold practice, drawing upon elements that include performance, sculpture, photography, and the Internet.

Ashley Rawlings’ conversational approach to the journalistic interview allies the artist and the writer, framing the work for a deeper level of communication. The present conversation will be punctuated by videos and stills of Bilal’s work selected by both participants.

Iraqi born artist Wafaa Bilal has exhibited, and lectured extensively to inform audiences of the situation of the Iraqi people, and the importance of peaceful conflict resolution. Bilal’s 2007 dynamic installation Domestic Tension placed him on the receiving end of a paintball gun that was accessible online to a worldwide audience, 24 hours a day. Newsweek called the project “breathtaking” and the Chicago Tribune described the month-long piece as “one of the sharpest works of political art to be seen in a long time” naming Bilal its 2007 Artist of the Year. Bilal has exhibited in Baghdad, the Netherlands, Thailand and Croatia; the Museum of Contemporary Photography, Chicago; the Milwaukee Art Museum; the Elizabeth Foundation for the Arts, and various other US galleries. His residencies have included Montalvo Arts Center in Saratoga, California; Catwalk in New York; and Rensselaer Polytechnic Institute. In fall 2008 City Lights published “Shoot an Iraqi: Life, Art and Resistance Under the Gun,” on Bilal’s life and theDomestic Tension project.

Ashley Rawlings is the Features Editor for ArtAsiaPacific magazine. Born in London, and after graduating from the Japanese Studies Faculty at the University of Cambridge in 2005, he lived in Tokyo, where he researched postwar Japanese art and worked as an editor and translator. His writing has appeared in the Japan Times, ART iT, Artforum.com, Saatchi Online, ArtReview and ArtAsiaPacific. He is the author and editor of Art Space Tokyo (artspacetokyo.com), and the co-editor of What is Mono-ha? (Tokyo Gallery + BTAP, 2007).

Arturo Vidich is an inter-media artist from New York. Beginning in 2003, Vidich’s performance work has been presented in New York by The Chocolate Factory, the Brucennial 2010: Miseducation, SITE Fest 2010, and Danspace Project at St. Mark’s Church, among others. He has also shown in Belgium, The Netherlands, Ireland, Scotland, and New Zealand. In 2008, Vidich was awarded the Movement Research Artist Residency, and in 2007, the first International Artist Residency at the Red Stables, Dublin, Ireland. In the same year, he co-founded Culture Push, and the open-source artist residency Genesis Project (culturepush.org). Vidich’s work has been featured in the Village Voice, The New York Times, and in an interview on WNYC. He is currently a master’s candidate at ITP, NYU Tisch.

With special thanks to White Slab Palace.