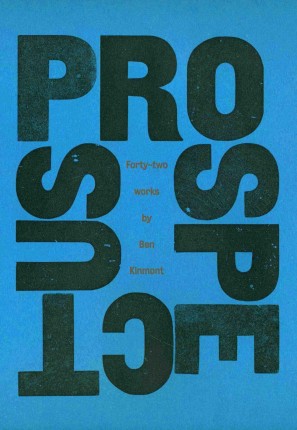 PROSPECTUS is a traveling survey show initiated by Kunstverein in which a selection of Kinmont’s works from the past twenty-two years are exhibited and (re)activated.

In New York the project includes the exhibition of Kinmont’s work at the Fales library with new commissions organized by Kunstverein NY and Performa ‘11. The source material for the project includes project descriptions and archives, past curated projects, publications from the Antinomian Press, and various photographs and sculptural objects.

Kinmont is interested in interpersonal communication as a means of addressing the problems of contemporary society through an attempt to establish a direct, personal relationship between the artist and the viewer, using the work as a mediator.  If art is supposed to be an agency of intellectual and emotional challenge, then Kinmont concludes that the audience should also be addressed beyond the institutional frame of the gallery and the museum, and that contact should be more direct.

At NYU Fales, the exhibition curated by Marvin Taylor will concentrate on the relationship of Ben’s work to archives through the presentation of six projects from 1995 to the present: Our Contract, or some thoughts on archive ownership and collection, 1995-2011; Antinomian Press, begun 1995; Promised Relations; or, thoughts on a few artists’ contracts, 1996-97; Moveable type, no Documenta, archive begun 2002; The Digger dug, archive begun 2004; and Sometimes a nicer sculpture is to be able to provide a living for your family, begun 1998.

Ben Kinmont will reactivate Moveable type, no Documenta through the printing and redistribution of texts in and around New York.  Additionally, two texts about the definition of project art and its ethical considerations will be printed and distributed during the show as part of the reactivation of the project The Digger dug. These will be handed out on the street with the assistance of students from the NYU programs in Museum Studies, Anthropology, and Art, as well as available for free within the exhibition space.

Visitors are invited to handle and photocopy elements from the archives. In addition, when new materials are generated from the reactivation of the above projects, the Library staff will add the materials to the archives.

Prior to arriving in NYC, Prospectus was first presented in Amsterdam, then in Paris at the Kadist Art Foundation.  After New York, in the spring of 2012, Prospectus will travel to Kadist San Francisco, the San Francisco Museum of Modern Art, and the MAXII in Rome.

About Prospectus…
The publication Prospectus 1988–2010 is a collection of Kinmont’s project descriptions, written over a 22-year period. The projects occur in places as varied as his own home, out on the street, in stranger’s homes, and in various exhibitions such as Documenta XI.

This book replaces the sold-out eponymous title from 1997. It is printed with lead type on acid-free paper and Smythe-sewn; the color illustrations are printed with polymer plates. The current monograph is sponsored by the Kunstverein Amsterdam + New York, the Kadist Art Foundation, Air de Paris, and the Fales Library at New York University.

About Fales Library and Special Collections…
The Fales Library, comprising nearly 200,000 volumes, and over 8,000 linear feet of archive and manuscript materials, houses the Fales Collection of rare books and manuscripts in English and American literature, the Downtown Collection, the Food and Cookery Collection and the general Special Collections of the NYU Libraries. The Fales Collection was given to NYU in 1957 by DeCoursey Fales in memory of his father, Haliburton Fales. It is especially strong in English literature from the middle of the 18th century to the present, documenting developments in the novel. The Downtown Collection documents the downtown New York art, performance, and literary scenes from 1975 to the present and is extremely rich in archival holdings, including extensive film and video objects. The Food and Cookery Collection is a vast, and rapidly expanding collection of books and manuscripts documenting food and foodways with particular emphasis on New York City. Other strengths of the collection include the Berol Collection of Lewis Carroll Materials, the Robert Frost Library, the Kaplan and Rosenthal Collections of Judaica and Hebraica and the manuscript collections of Elizabeth Robins and Erich Maria Remarque. The Fales Library preserves manuscripts and original editions of books that are rare or important not only because of their texts, but also because of their value as artifacts.