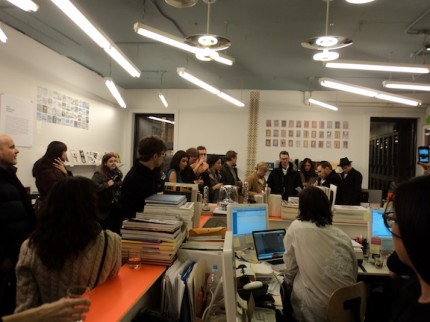 Special reading by poet and calendar contributor Todd Colby, and a reading from an unreleased, newly translated work by Ian Monk read by artist and curator Mark Beasely with signings by Marianne Vitale and Michael Portnoy.

The event celebrates the release of two new publications: On View Worldwide for the Month of…, official Kunstverein NY calendar and Prompts by Ian Monk (OULIPO).

New publications from Kunstverein sister organizations will also be available, including The Encyclopedia of Fictional Artists and The Addition, edited by Koen Brams and  Krist Gruijthuijsen and Ginger & Piss #2 – Gay from Kunstverein Amsterdam; and Heman Chong: I’m On Your Side, an editorial project by Heman Chong and Kunstverein Milan.

Special thanks to Sandeep Bhuller and Keith Gray from Printed Matter.

In the context of, On View, Worldwide, for the Month Of…, a project by Kunstverein NY, artists and writers were invited to insert images and text onto the pages of corporate and drugstore calendars.  These artifacts, pasted onto an existing template, layer images by way of montage to decode corporate imagery through accumulation rather than deconstruction. With contributions from Art Club 2000, Mark Beasley, Todd Colby, Kathryn Garcia, Adam Kleinman, Sue Leponte, Josephine Meckseper, Aleksandra Mir, Nils Norman, Lisa Oppenheim, Michael Portnoy, Dana Sherwood, Alexandre Singh, Dexter Sinister, Michael Smith, Marianne Vitale, and Judi Werthein. On View, Worldwide, for the Month Of… ironizes the familiar mechanisms of corporate culture.  Whether reflected in the museum setting, in the ink and paper used for this publication, or even in the very source material from which some artists’ images are derived, its own viral nature is evidence of the ubiquitous presence of the post-capitalist office environment.
$15 (launch price)

Devised for The Prompt as part of Performa 09 in New York, and the Transart Festival in Bolzano, poet and OULIPO member Ian Monk’s interrogative parlor game Prompts uses a deck of instructive cards to orchestrate interactions between participants around a variety of topics and behaviors. The direction of the interactions relies on the personality of those who deal and receive the cards.

Ian Monk (b. 1960) is a British writer, poet and translator based in Lille, France.  He is also a member of the French writing and mathematics workshop, OULIPO (“Workshop of Potential Literature”), which has met since 1960 to develop constraints for generating text.  Monk has translated numerous books, among them novels by Daniel Pennac and Georges Perec, and published original works in French and English, including Family Archeology and Other Poems (2004) and Plouk Town (2007).
$50 (launch price)

The Encyclopedia of Fictional Artists and The Addition
Edited by  Koen Brams and  Krist Gruijthuijsen
“Encyclopedia of Fictional Artists” (1605–today) is a project by Koen Brams, who together with co-editors, initiated a compilation of biographies of fictional artists as presented in world literature. “The Addition” is Krist Gruijthuijsen’s editorial answer to the “Encyclopedia,” inviting more than 20 artists to reflect upon the problematics of fiction, history, and encyclopedic knowledge.

Published with Kunstverein, Amsterdam; de Appel arts centre, Amsterdam; Mondriaan Foundation, Amsterdam; and with the help of the Flemish Literature Fund, Antwerp as well as the Foundation for the Production and Translation of Dutch Literature.
€ 39

Ginger&Piss #2 Gay is the subject of the second issue of Ginger&Piss(Kunstverein’s occasional in-house magazine) and continues the magazine’s flirtation with all-purpose (non) themes.
€ 15

Heman Chong: I’m On Your Side
Editorial project by Heman Chong and Kunstverein (Milano)

The publication I’m On Your Side is the fourth part of a project conceived by Heman Chong for Kunstverein (Milano). After the three-fold project of the same name, presented in Milan in November 2010 the publication is understood as a compendium of the entire enterprise.  Alongside the three essays and an introduction by Chong, three subjective visual selections “a floating world of images” are published. The images are taken from God Bless Diana, a series of over 500 photographs Chong produced between 2000-2004.
€ 8,90