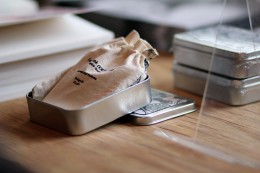 Devised for The Prompt for Performa 09 in New York and the Transart Festival in Bolzano, poet and OULIPO member Ian Monk’s interrogative parlor game Prompts uses a deck of instructive cards to orchestrate interactions between participants around a variety of topics and behaviors. The direction of the interactions relies on the personality of those who deal and receive the cards.

Ian Monk (b. 1960) is a British writer, poet and translator based in Lille, France. He is also a member of the French writing and mathematics workshop, OULIPO (“Workshop of Potential Literature”), which has met since 1960 to develop constraints for generating text. He has translated numerous books, among them novels by Daniel Pennac and Georges Perec. He has published original works in French and English, including Family Archeology and Other Poems (2004), and Plouk Town (2007).