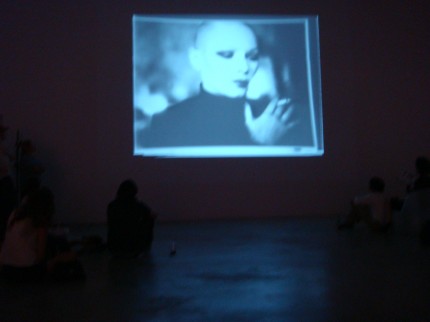 Sarvia Jasso is an independent curator, and co-founder of Brooklyn is Burning (BiB), a video and performance event that was produced at various locations from 2008-2010. She was a curatorial fellow at The Kitchen and has organized exhibitions and events in New York and California.

Works featured in the program:

Skip Arnold Girls In Bikinis (1983)
This is an excerpt from a larger body of works entitled Activities Made for TV. 1983-1992. All activities were timed and shot for television as its final form of presentation. Employing his own body in confrontational performances, Arnorld’s work explores the ways in which the body is a vehicle for aggression, manipulation and power dynamics. In this particular video, Arnold’s hyper-masculine behavior is both shockingly absurd and laughable.

Danielle Levitt  Isis (2010)
This is part of a new series of video interviews in which Levitt asks four transgender Latino girls what it means to come of age in inner-city New York. Levitt’s video reveals an intimate portrait of a transgender teen pursuing a new identity, undaunted by the challenges she has come across.
‘The first time the photoseries “la dame au crâne rasé” was shown at the end of the seventies, we made a video that combined filming the photos with live takes of me with the bald head inbetween. So you see part of the photoseries and inbetween this androgyn person, but you hardly can make a difference between the photos and the filmed person, because it is perhaps only a blink that shows that this was the living person.’

Tameka Norris Untitled (F*ing Art History) (2009)
Ingres, Eva Hesse, Degas, Gauguin, Betye Saar, Kara Walker, African Sculpture, Performance—all of these books stacked on top of each other creating a mountain of referential material. Norris’ interest in the demystification of the African American female body and her place both within and outside of the art world serves as a jumping off point for this institutional critique.

Genesis Breyer P-Orridge  Pandrogeny Manifesto (2005)
Prayers for pandrogeny and breaking sex: In the beginning, all were perfect. The first man was the first woman, the first woman was the first man. Until the whispering began- she is he, he is her.
Starting in the early 1990’s, Genesis and Lady Jay set out on a journey to transform themselves physically to reflect their desire to become one.  Their proposition is an attempt to neutralize gender and strip it bare of its socially imposed identities. According to Genesis, “Pandrogeny is not about defining differences, but about creating similarities. Not about separation but about unification and resolution.”