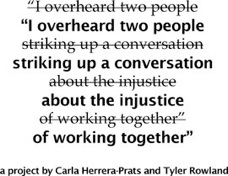 A Project by Carla Herrera-Prats and Tyler Rowland

Kunstverein NY is pleased to present the first New York joint exhibition of Carla Herrera-Prats and Tyler Rowland, an investigation into the nature of collaboration and communication.  I overheard two people… activates the work and relationship between Alexander Graham Bell, well known as the inventor of the telephone, and his assistant Thomas Watson, who both resided in the Boston area.

After working together for two years, Bell and Watson filed the first telephone patent on February 14, 1876 amid much controversy, hours before another inventor, Elisha Gray, filed claim for a similar device. One month later, Bell successfully placed the first telephone call to his assistant with the invitation, “Mr. Watson—come here…I want you.”

Both Carla Herrera-Prats and Tyler Rowland met in 2001 while attending CalArts.  They started working together in 2006 when Herrera-Prats relocated to Boston to teach at the Boston Museum School, and Rowland was teaching at Harvard University in Cambridge.

I overheard two people … transfers the aural experience of the telephone into a variety of sensorial media, including a participatory kite flying performance on February 14th to open the exhibition, and in homage to Elisha Gray, or history’s “second best”; and On March 18th, the artists’ partners will commemorate Bell and Watson’s relationship with a reading of the first telephone transcript between the inventors.

About the Artists…
Carla Herrera-Prats was born in Mexico City.  She received her MFA from CalArts and participated in the Whitney ISP in New York City.  She is currently part of the collaborative CAMEL. Her recent exhibitions include El Centro de la Imagen, Mexico City; The Contemporary Museum, Baltimore; Art in General, and Artists Space, New York. She has also shown in Colombia, Japan, Mexico, Philippines, and Puerto Rico. She has been awarded grants from CalArts, the Van Lier Foundation, the Jumex Collection, and the LEF Foundation. She currently teaches at Cooper Union.